Bahamas Academy of Seventh-day Adventists is committed to helping students develop character through a personal relationship with Jesus Christ, promoting high standards of excellence and preparing students for service now and for eternity.

One family under God demonstrating Christian values and academic excellence.

Bahamas Academy is committed to:

Bahamas Academy aspires to train the head, heart, and hands of a child. Our goal is to provide a holistic education that will create the best citizens now, but more importantly, prepare students for a place in heaven. We aim daily to achieve this goal. With over 100 years of operation, Bahamas Academy is certainly an educational success story in many ways. Why not make us your school of choice? For information on enrollment, see our ADMISSIONS PAGE. 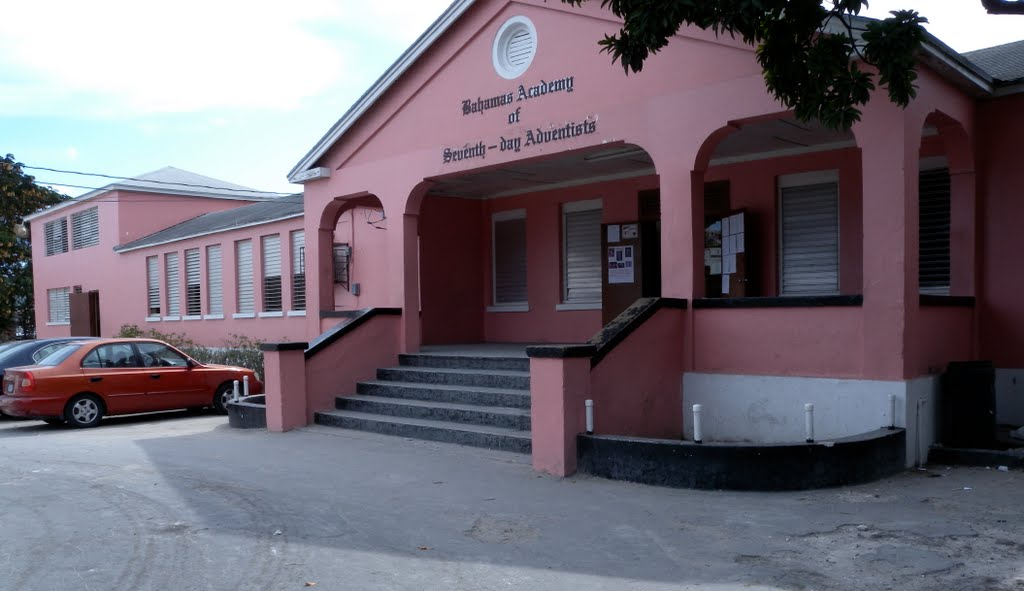 The history of Seventh-day Adventists Education in the Bahamas could be traced to 1912. With professor Coffin as principal and his wife as a teacher, the first church school opened in the Odd Fellows building on Meeting Street. The pupils enrolled were children of missionary parents, Elder and Mrs. James Smith. From that small beginning of a two-pupil school, supported by a band of faithful believers in Christian education, the institution grew into separate schools with a total enrollment of eight hundred and forty-eight students and a combined teaching staff of thirty-five.

During the first thirty-five years of its existence, the school was primarily an elementary school. It operated at various locations in New Providence, including the basement of the old Shirley Street Seventh-day Adventist Church.

From this location, the school was moved to Hawkins Hill (Mt. Royal Avenue) until 1948 when it was relocated on the Wulff Road site. It was housed in a building designed and built by Elder H. D. Colburn, then president of the Bahamas Mission of Seventh-day Adventists. The school moved from the Wulff Road location in June 2011and reopened for the 2011-2012 school year in September 2011 at its present site #73 Marshall Road.

During the early years, the principalship of the school was held by a number of missionaries from North America and Jamaica. These included the Coffins, one Miss Wright, A. R. Haig, Mr. Salters, the Beddoes, Crawfords, D. B. Reid, Miss Zoe Lawrence, O. P. Jones, W. W. Liske, and Miss Jane Mullings. More History…

In 1983 The Board of Regents of the General Conference of Seventh-day Adventists granted the Academy initial accreditation. Full accreditation was granted in 1985 for a period of three years. In September 1985 Mrs. Althea McMillan was appointed principal of the elementary division of the Academy. This appointment marked the separation of the administration of the two schools. It was believed that a reorganization of the administrative structure of the Academy would enhance the development of both the elementary and secondary schools.

N.B. Any history of Adventist education in The Bahamas would be incomplete without some reference to "Mr. Toote's School" in Andros and Grand Bahama Academy. However, as noted by historian, Jeff Thompson, more research will have to be conducted to ascertain the relevant information on these two schools. Therefore, every effort will be made to include these schools in a revised account of Adventist education in The Bahamas.

See What Our Customers Are Saying

You Are Here: Home // About Us

You Are Here: Home // About Us